“Tibet and Queensland unite in beautiful display of musical and cultural unity...Camerata – Queensland’s Chamber Orchestra on prides itself on innovative and adventurous programming across a range of styles and it’s clear on these thoughtful, sensitive performances that they’re completely at home.” (Limelight, 2022) 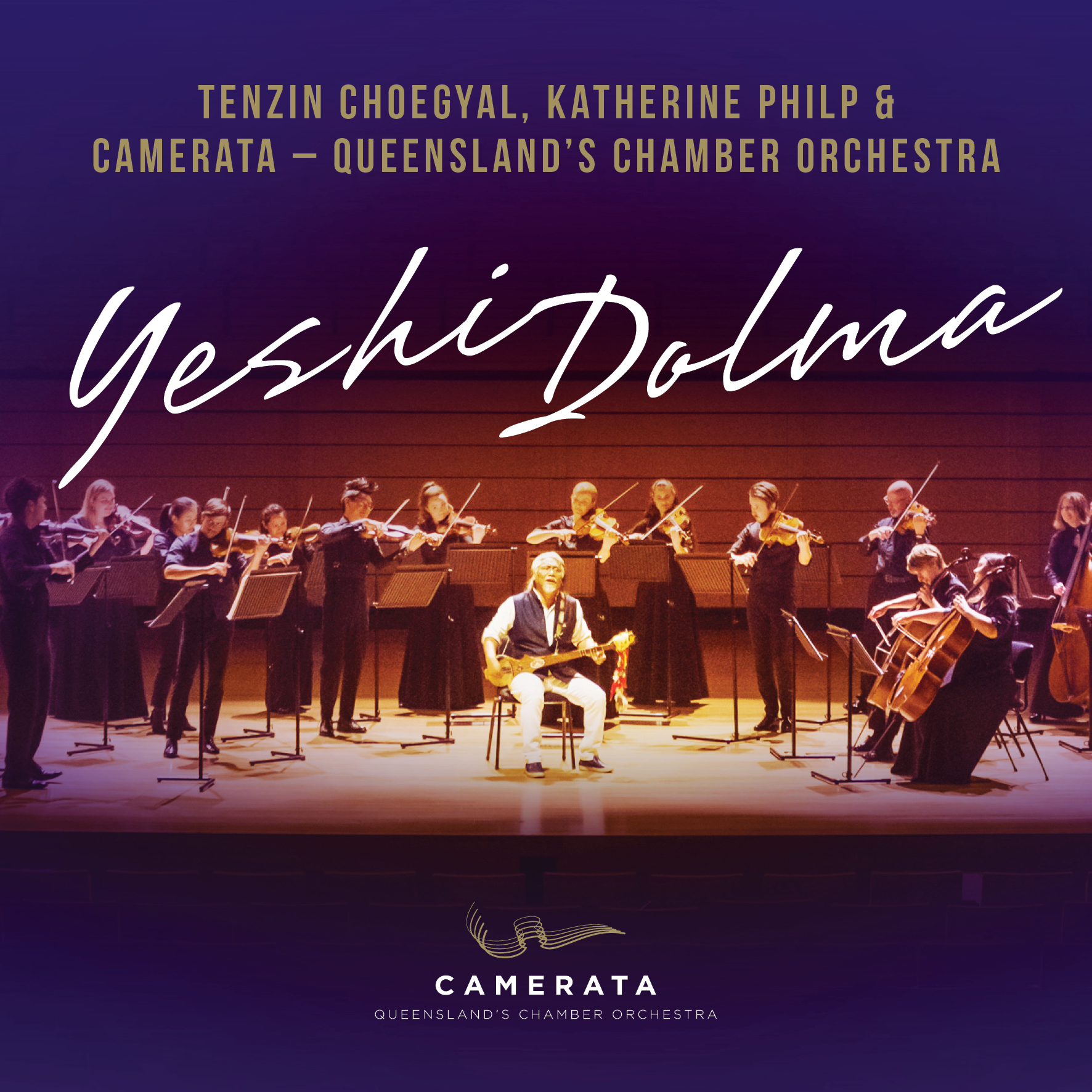 After more than 10 years of artistic and musical collaboration, Camerata – Queensland’s Chamber Orchestra is delighted to announce the release of the album Yeshi Dolma with Grammy-award nominated artist Tenzin Choegyal, Brisbane-based Tibetan singer/songwriter.

The album is a beautiful intersection of a long-term friendship – both artistic and personal – between Tenzin Choegyal and Katherine Philp, Principal Cellist, as well as more than a decade of collaborations with Camerata – Queensland’s Chamber Orchestra, most notably at Brisbane’s Festival of Tibet.

“[Yeshi Dolma] will be my first full album with a Western orchestra and we might be the first to be building this bridge between the sounds of Tibet and the Western Classical music world.”
Tenzin Choegyal

The album title, Yeshi Dolma, is the name of Tenzin’s late mother, and is a tribute to her strength and the hardship she endured after fleeing her homeland after the Communist China occupied Tibet, raising nine children on her own and also fostering a hundred orphaned Tibetan children in exile.

Listen on Spotify, Apple Music, Tidal, or wherever you stream your music

Tenzin says, “Kat and I first met in West End, Brisbane, while she was studying at The Con (Queensland Conservatorium) in the early days of my journey of making Brisbane my new home. We became friends for life, not just in the musical universe.”

Katherine was able to improvise and connect with Tenzin’s songs, to co-write some with him and in doing so forge a connection between Tenzin’s Tibetan songs with the classical cello.

“Kat is probably one of the first few western classical players with whom I actually started collaborating musically. I did grow up with occasionally listening to music by Mozart, Vivaldi and others in this genre that were brought by travellers while growing up in my refugee days in Dharamsala, India in the early 1980s and ’90s. I never imagined that I would one day be collaborating with artists from this genre. It’s been super special.” Tenzin says. 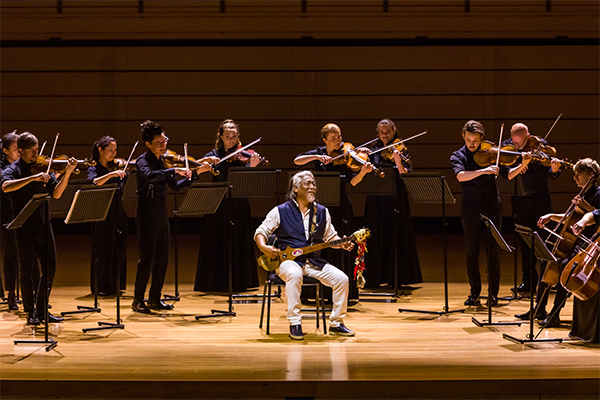 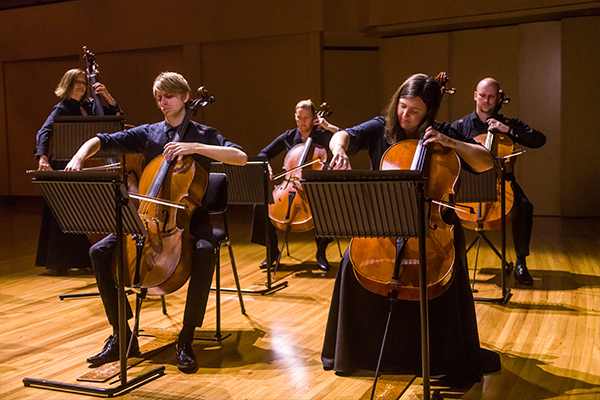 Camerata regularly performs music from a range of genres and eras, so it made perfect sense when Katherine suggested Tenzin as a potential guest artist to appear with Camerata for a concert in Brisbane’s St John’s Cathedral (2009). She created string arrangements to connect the orchestra with him in a more structured way.

Katherine says, “I first heard Tenzin sing at Woodford Folk Festival in 2001 and had already been listening to his music for a few years when we were introduced by a mutual friend. We’ve been playing together ever since, and through the years and many projects Tenzin’s music and friendship has been an important influence for me as an artist.

“Our work together led to me undertaking an Asialink residency at the Tibetan Institute of Performing Arts in India, which continues to shape me as a musician and a person.

“It’s always amazing and heart-warming to collaborate and be immersed in the magical strings of Camerata and their friendships. It’s beautiful to experience the journey and it’s a mystical display of my own songs when collaborating with Camerata.

“I have always looked forward to presenting the Mystical Tibet (concert) with Camerata over the years at the Festival of Tibet in Brisbane. It has always been a highlight for me at that Festival.”

Camerata is also delighted that this album includes the recordings taken on their 2020 Camerata Live! tour to South West Queensland including students from Toowoomba Grammar School, Dalby South State School, Chinchilla State School, St Patrick’s School St George, and in Brisbane the Dutton Park State School and Toowong State School, who are all singing in Heart Strings after sessions with Tenzin (who also joined Camerata as a guest artist on the tour). 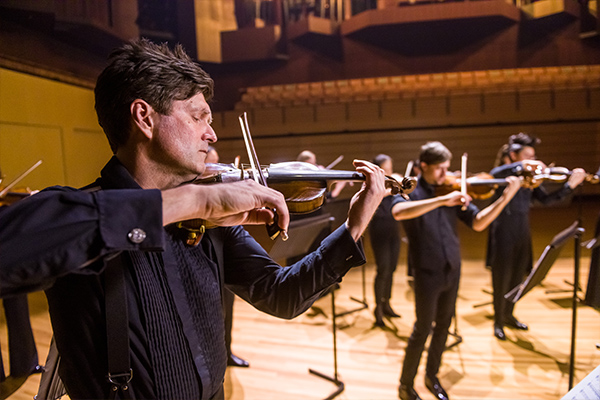 Listen on Spotify, Apple Music, Tidal, or wherever you stream your music

Time and time again listeners have asked Tenzin and Camerata to record these songs and so Camerata is delighted to finally have been able to draw these threads together into this beautiful album, Yeshi Dolma.

Camerata is grateful to the Queensland Government through Arts Queensland for the support that has made this project possible, and the Queensland Performing Arts Centre for allowing the rare opportunity to record in the stunning acoustic of the Concert Hall. Camerata thanks Geoff McGahan for his exceptional skill in capturing the performances, and his easy-going manner in sessions to mix and balance. 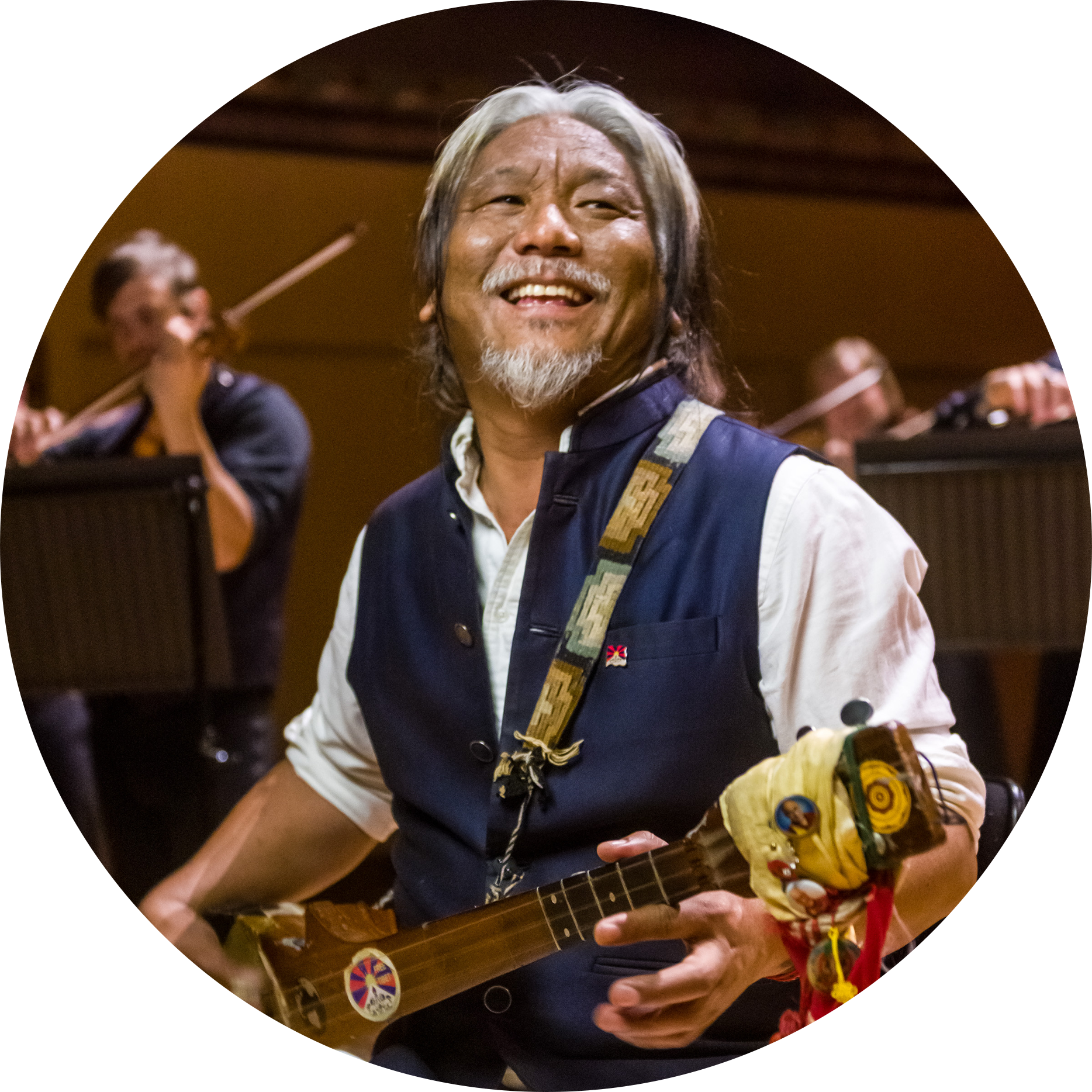 Tenzin Choegyal is one of the world’s finest musicians with Tibetan lineages. Tenzin is a Tibetan/Australian artist, composer, activist, musical director and cultural ambassador.

While proudly continuing the unbroken nomadic lineage which is central to his music, Tenzin also embraces opportunities to take his music into more contemporary, uncharted territory, both in the studio and on stage.

Tenzin has nine independent albums, three of them with his fusion band Tibet2Timbuk2, and regularly performs with Camerata Brisbane’s acclaimed Chamber Orchestra. His collaborative albums include The Last Dalai Lama? with Philip Glass and the 2021 Grammy-nominated Songs from the Bardo with Laurie Anderson and Jesse Paris Smith – a moving interpretation of the Tibetan Book of the Dead.

An outstanding composer/performer with a great depth of musical knowledge, intuition and inventiveness, Tenzin continues to bring together the two worlds of Eastern and Western music in unique compositions, collaborations and special cultural events. 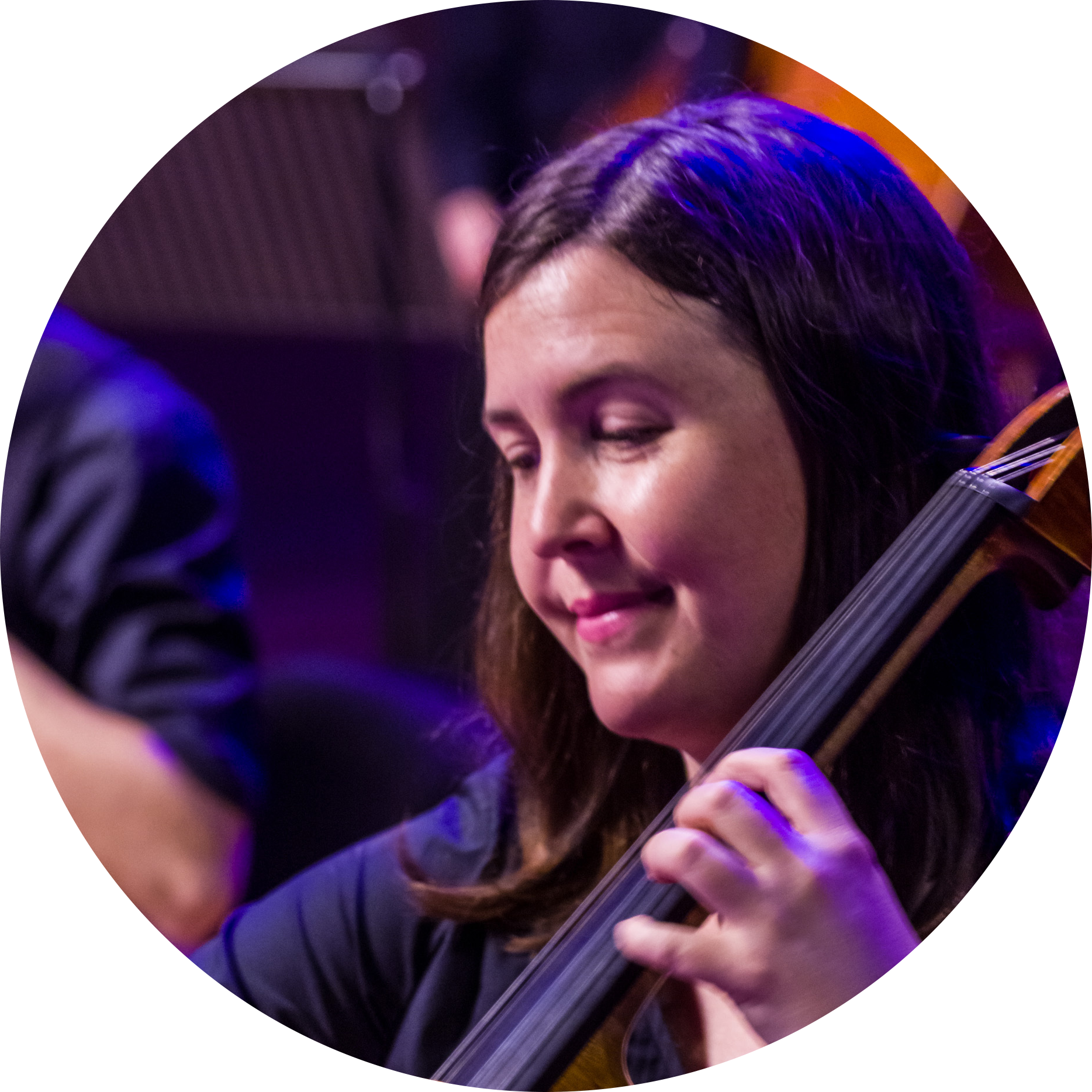 Cellist Katherine Philp’s work ranges from the classics, to cutting edge contemporary art music, as well as improvisation, arranging and composing. She is particularly interested in projects that engage in respectful intercultural collaboration, and actively supports the generation of new works by women and non-binary composers. She regularly appears in ensembles and as a soloist at many Australian festivals including the Australian Festival of Chamber Music, Tyalgum Festival, Bendigo International Festival of Exploratory Music, and the Woodford Folk Festival. Katherine’s performances and arrangements have been broadcast live and recorded for ABC Classic FM and ABC Radio National. She is currently the principal cellist of Camerata – Queensland’s Chamber Orchestra, and maintains a busy and eclectic freelance career.

In 2009 Katherine undertook an Asialink residency (supported by Arts Queensland and Australia Council) at the Tibetan Institute of Performing Arts in Dharamsala, India, where she studied Tibetan classical and folk music. This formative experience has led to 15 years of close collaboration with Tibetan Singer and Instrumentalist Tenzin Choegyal on a series of projects including performances at the Woodford Folk Festival, the Sydney Opera House, Tyalgum Festival, the annual Festival of Tibet at the Brisbane Powerhouse, and recordings for ABC Radio National.

More recently, Katherine has become increasingly acknowledged for her performance of new and experimental music and has undertaken study with Rohan de Saram and Lucas Fels (of Arditti String Quartet). Recent new music highlights include performances with Melbourne-based Rubiks Collective, performing in a portrait concert of Liza Lim’s works with Arcko Ensemble, While You Sleep (a collaboration between composer Kate Neal and artist/animator Sal Cooper), creating improvised solo cello film scores for film-makers Amiel Courtin-Wilson and Jordan Giusti, and recording with the Australian Art Orchestra.

Katherine has performed and studied in India, Austria, Germany, Switzerland, taken part in the Impuls Academy and the International Summer Course for New Music Darmstadt, and in 2016 received an award for Best Performer, playing Berio’s Sequenza XIV at the San Marino New Music Project.

Images taken by Darren Thomas at the Concert Hall, QPAC

Heartstrings
Book Now
From My Homeland
Book Now
Laura Jean with Camerata
Book Now
Viva Violin
Book Now
Orange Chamber Music Festival
Book Now
Camerata Cinematheque
Book Now
Synthony No.3
Book Now
Camerata recognises that we work and create on the lands of the Yuggera and Turrbal people in the area given the name Kurilpa or place of the water rat. We acknowledge the Traditional Owners and First Nations Peoples of the places where we perform. We acknowledge that First Nations Peoples are the first artists, storytellers, performers and creatives of these lands. We pay our deep respects to Elders past and present.